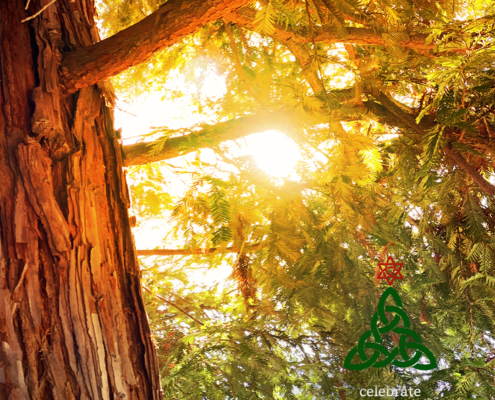 Christianity came to the land of the Celts about the 5th century AD, and it found a deeply engrained belief system complete with priests, festivals, and traditions. For centuries these people celebrated festivals around the Summer and Winter Solstices as well as the Spring and Autumnal Equinoxes, led by their Druids and based on the seasonal changes, as well as the agricultural cycles for which their lives depended. I know it is a different holiday, but trust me when I say St. Patrick had a lot to do with the introduction of Christianty in Ireland and beyond!

The sun played an important role in these people’s survival, as it warmed their homes, grew their crops and provided light for long periods of time during the summer months. So, when the seasons changed and the sun grew scarce, this was an anxious time for them as winter closed in and the nights grew longer. The longest night of the year, what we call the Winter Solstice, was celebrated as a milestone for these people. They had made it to this point with whatever food they had stored, and they knew that the sun would now start to stay out a little longer each day. In effect, the sun was being reborn again, and its life-giving properties along with it.

The Winter Solstice falls on December 21st. The early Christians recognized in order to have more success converting these pagans to Christianity, they should assimilate many of their festivals, beliefs and holidays into this new religion. Since the Son is born at Christmas, yet the Bible really does not say when that is, choosing a date near an existing pagan holiday made sense, and easily assimilated into the Celtic culture.

Both the Winter Solstice and Christmas celebrate the birth of the Sun/Son and is one of the biggest festivals in both belief systems. Accompanied by feasts, fires, drink, song, and decorations, it is a time when families and friends gather together and celebrate these joyous times. Whiskey had not been discovered yet, so I imagine these people drank a lot of ales, fruit wines and mead (fermented honey).

Midwinter with Kilt & Cork will continue to explore how these two celebrations overlap and where some of our most precious traditions originated!

Plan on waking up before sunrise one day this week, with the only goal of greeting the new day as it begins! Enjoy a cup of hot coffee or tea, bundle up in warm clothing and go outside to enjoy the new day.  Think of something your are grateful for, meditate or pray, but take this time to connect with the the human need for warmth and light.  Happy Holidays! RR

Want to join the discussion?
Feel free to contribute!

Fill in the blank! Name the artist! #rockandroll

I want to shout out the amazing hard working kids

What a great night! Please post your pics and tag

Thank you all so much for supporting our Kilt & Co

A real long time in the works, first episode of th

We had our own Happy Hour with Carrie & Russ last

Look what we have here!! Can’t wait til Summer!

The first course is something to welcome you to th

I love running into people who follow me on social

I am a dessert first kinda guy, so let’s take a

I have seriously never had Ice Cream this good! Yo

Two of my favorite food groups Beer and Donuts! Ha

This week, I got to spend some time visiting my da

Wine and dinner with friends before my 6:00am flig

Goats on the beach and sushi with my eldest son! I

Tonight is Line Dancing with Cathy Paris at the @c

A quick backpacking trip to @joshuatreenps with my

Load More... Follow on Instagram
Processing…
Success! You're on the list.
Whoops! There was an error and we couldn't process your subscription. Please reload the page and try again.
Music Is The Spirit Of The Season

A Candle in the Window
Scroll to top